Mossberg began their manufacture of firearms with a pistol called the Brownie Trapper which was a 4 shot 22 caliber they sold for $5.00. I wish I could buy that Trapper Derringer now for $5.00. Although I have not owned a Trapper I have read that they were a very reliable handgun. 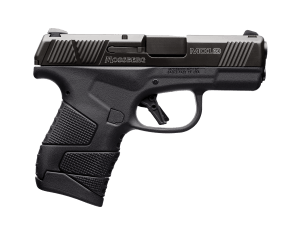 Mossberg celebrated 100 years in business with a new pistol; the Mossberg MC1sc. Although Mossbeg is known for shotgun the MC1sc pistol is a very nice pistol. I bought one to make holsters for but I was very impressed when I took it out to the range to shoot. It shoots very nicely. Feels and shoots almost like a S&P Shield.

We made a really nice holster for the MC1sc pistol. The holster is very compact and comfortable. To Check out our listing on the Mossberg MC1sc holster click https://triggerprotect.com/product/mossberg-mc1-holster/.

This site uses Akismet to reduce spam. Learn how your comment data is processed.

Our Company Mission
To make the most comfortable and safe Concealed Carry method available anywhere, you'll almost forget your wearing it!
Our Philosophy
We have an inalienable right to protect ourselves endowed to us by God. The Usa Founders believed that it was the duty of the government, (an inferior power), to help secure and protect inalienable rights from encroachment or usurpation. Our United States Constitution protects our inalienable right to bear arms. We support the Constitution and the Bill of Rights and freedom for Americans.
Our Promise
We wear our holsters every day and experience our added comfort and improvements... We promise to provide quality and dependable Products you will love with a 30 day money back guarantee!
Our Patriotism
The Usa was founded on Christian Principles. We are born and raised in the Usa, love Jesus and are devoted to God and Country...
[popup_anything id="1721"]